“I  Wish I Could Have Every Quarter Back”

I am a second generation Jewish American; the grandson of a plumber and a butcher, the great-grandson of a Rabbi.

My family originally comes from the Village of Shershov, now called Shereshevo, in Belarus, close to the Lithuanian and Polish Border.  My grandfather, Zeyidal Linowski, was 20 years old when he emigrated to the United States along with his father and sisters after his mother’s death and in the face of almost daily violent attacks called “pogroms” carried out by local militias called “Cossacks."

Jews lived in Shershov as far back as the 15th Century.  Shershov was a thriving agricultural community and a center for Jewish learning and study. Jews lived in segregated villages or “shtetls”, but close to their Christian neighbors and in general harmony.  Jews were never permitted to own property and generally depended upon trades and small businesses to maintain their families. My great grandmother ran a boarding house so that my great grandfather could spend his days

studying the Torah and Talmud. 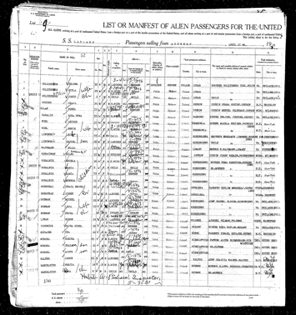 As Russian society edged toward revolution against the Tsarist regime, Jews became open targets for the Cossacks.  Jews were blamed, without foundation, for the source of society’s collapse, and open attacks on the shtetls were promoted by the government.

My great grandfather was a Rabbi, a teacher.  As the violence against Jews became commonplace, he was often targeted for humiliation and abuse.  My grandfather told of several vivid memories of his father being dragged into the forests to be beaten for no reason other than his “crime” of being Jewish.  My maternal grandfather witnessed his brother’s head being sliced off by a Cossack on horseback marauding threw the shtetl during one particularly violent pogrom.  As a young boy, I asked my maternal grandfather why his left eye was completely discolored and blank; he explained that my great grandmother was so fearful of her son’s conscription into the army, a 25 year obligation for Jews where religion could not be observed and where Jews were often beaten or killed by their own units,  that she poured acid into his eye so he could not be called into military service.

As most Jews faced beatings, killings, unemployment, starvation and constant harassment, my family made the difficult decision to leave their village.  On April 21, 1921, my grandfather, at 20 years old, began the long and dangerous journey to the United States, carrying for his elderly father and sisters, only those possessions that could fit in one makeshift bag, as they traveled on foot and on boxcars through Russia and Poland to Hamburg, Germany to book passage in steerage to the United States and entry through Ellis Island. Between 1920 and 1943, the Jewish population of Shershov dwindled from 10,000 to less than 2,000.  On January 27, 1943, a Gestapo unit entered Shershov, murdered the Jewish village officials, and stuffed the remaining Jews  of Shershov and its surrounding villages into cattle cars for extermination at Auschwitz.

Today, there is no evidence that Jewish population ever existed in Shershov, now called Shereshovo.

If you replace Linowski with Rantisi, and Shershov with Lydda, the story of one Jewish family forced from their home has remarkable and tragic parallels with the story of one Palestinian family. If you replace the story of hundreds of thousands of Jews living in Eastern Europe with hundreds of thousands of Palestinians families living in pre-1948 Palestine, neither group can find evidence of their homes or their existence in the villages in which their families lived for generations.

I was raised to blindly support Israel as the last, best hope for Jewish survival in a hostile, post-World War II world. I dutifully collected quarters in a little blue box marked “ Jewish National Fund” and was told that my quarters would be used to make the desert bloom for a” people without a land” settling in a “land without a people.”  Knowing what I know today about the expulsion of Palestinian refugees in 1948 and the planting of trees over destroyed Palestinian Villages, I wish I could have every quarter back.

We, Jews and Palestinians, have a shared history, but we, Jews, did not learn well from our own persecution.  For more information about the expulsion of Palestinians from pre-1948, see Illan Pappe’s “The Ethnic Cleansing of Palestine”.  Also, for a compelling story about a shared refugee history, see Sandy Tolan’s “The Lemon Tree, An Arab, a Jew in the Heart of the Middle East.”

The Manifest from my grandfather's passage in 1921 from Hamburg to the U.S.