I believe in the importance of remembering and naming. Together they offer some tangible hope of building better futures on top of historical tragedies.  Remembering and naming are not without responsibility. They call all who hear to work to rectify the wrong done.

The tragedy I testify to is the forcible expulsion of my father-in-law and his family from their home in Lydda, mandatory Palestine.  Audeh Rantisi, my wife’s father, was born in the Palestinian city of Lydda. The Rantisi’s were Greek Orthodox Christians who farmed olive and orange groves and manufactured olive oil soap.  The Rantisi’s had resided near and/or in Lydda for the better part of 1600 years.

Audeh and his entire family were expelled at gun point by Israel’s military.  On the afternoon of 12 July 1948 David Ben Gurion issued an order, which was duly signed by commander Yitzhak Rabin, that Lydda’s Palestinian inhabitants were to be expelled.  Israeli soldiers went house to house to roust the owners, like Audeh’s family, and push them into the street under gunfire.

For the Rantisi’s their expulsion began when three Israeli soldiers came to their home and ordered everyone out.  With firing over their heads by the army, they were pushed not to their home but to a gate leading to a road heading east towards the foothills of the West Bank.

Audeh described the events as follows.

“In front of me [as we walked out of town] a cart wobbled toward the gate. Alongside, a lady struggled, carrying her baby, pressed by the crowd.  Suddenly, in the jostling of the throngs, the child fell.  The mother shrieked in agony as the cart’s metal rimmed wheel ran over her baby’s neck.  That infant’s death was the most awful sight I had ever seen.  Outside of the gate the soldiers stopped us and ordered everyone to throw all valuables onto a blanket.  One young man and his wife of six weeks, friends of our family, stood near me.  He refused to give up his money. Almost casually, the solider pulled up his rifle and shot the man. He fell, bleeding and dying while his bride screamed and cried. I felt nauseated and sick, my whole body numbed by shock waves.  That night I cried too, as I tried to sleep alongside thousands on the ground….  Early the next morning, we heard more shots and sprang up….  Everybody started running as in a stampede…. The next day brought more dreadful experiences. Still branded on my memory is a small child beside the road, sucking the breast of its dead mother. Along the way I saw many stagger and fall. Others lay dead or dying in the scorching midsummer heat…The wife of my father’s cousin became very thirsty. After a long while she said she could not continue. Soon she slumped down and was dead.  Since we could not carry her, we wrapped her in a cloth, and after praying, just left her beside a tree.”

This tragic suffering was repeated throughout what is now Israel to over 800,000 Palestinians in and around 1948. They were removed simply because they were Palestinians. By the creation of a series of racist laws by the newly created state of Israel, Audeh and his family could never return to live in their homes or to assume ownership over their lands despite living only 30 kilometers from them.  He lived his life in Ramallah, where along with his wife, he founded a home for orphaned boys. This was his way of nurturing the childhood in them, which he had taken from him in 1948.

Palestinian refugees like Audeh Rantisi indeed have the moral and legal right to return to their homes and lands inside of Israel and to be compensated for their losses. Remembering and naming requires nothing less than this act of justice.

For more, read,  Blessed Are the Peacemakers, by Audeh Rantisi. 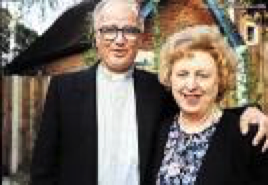